Why are pollinators important? Consider your neighborhood pollinators and support a healthy local ecosystem with a pollinator garden design.

A garden is a powerful tool in the search for self-reliance. Properly planned and maintained, just a 20-by-40-foot plot can be enough to feed a family of four year-round. Our gardens shouldn’t only cater to human tastes, however. The same areas we use to feed ourselves and our families are also powerful for attracting and fostering populations of native pollinators, predators, and other beneficial wildlife. A pollinator garden design considers the needs of these local animals that have spent millions of years honing their skills and are important to have around the garden. Why are pollinators important? North American pollinators, such as bees, flies, and butterflies, can ensure your plants are properly fertilized, in some cases even improving both fruit set and size in the plants they pollinate.

While these pollination agents help your garden operate at its maximum efficiency, garden predators, such as wasps and beetles, work behind the scenes to feed on both plant and animal pests. In a properly functioning ecosystem, these animals exist in a tenuous balance, with enough pollinators and predators living in an area to ensure pests are kept to a minimum while pollination stays at a maximum. Unfortunately, many of these plant and animal networks are easily disrupted through urbanization and the subsequent destruction of their habitats. But things aren’t all bad. It’s relatively easy to garden in a way that brings your local pollinators and predators closer to your plantings long-term, where they can benefit your plots in a variety of ways.

Why Are Pollinators Important?

Let’s get right down to it: No matter how well you plan your garden, it’s destined to fail without proper pollination. Most flowering plants rely on pollen from other plants of the same species to properly form the seeds, fruits, vegetables, and nuts we eat. We all understand this at a basic level, but it’s easy to underestimate the problem this can present to our plantings. The plants and animals in an area develop close relationships with each other, and many plants have animals they prefer to pollinate them for one reason or another. For example, many North American azaleas, rhododendrons, and mountain laurels prefer to be pollinated by North American bees and other pollinators, but they can be downright poisonous to pollinators from other locales.

Many of the plants typically grown in gardens are exotic specimens, coming from far-flung and geologically different areas than that in which the intrepid green thumb intends for them to grow. This means they’re already starting at a disadvantage, since their preferred pollinators aren’t normally in the area. It’s of critical importance to the gardener that as many pollinators be attracted to the space as possible, which will increase the likelihood that at least one efficient pollinator can be found for each particular plant.

A wide range of easygoing pollinators live in North America. These generalist pollinators aren’t overly specialized toward relying on a single plant for forage. Solitary bees make up a good percentage of the generalist pollinators in and around the garden, where they live in either holes drilled into wood by beetle larvae or in tunnels they dig in the soil themselves. Larger bees, such as bumblebees and carpenter bees, are also important generalists and are both capable of buzz-pollinating the flowers they land on. This involves vibrating their flight muscles at specific frequencies as they land, causing pollen to rapidly dislodge from inside the flower. Buzz pollination is especially effective for inverted blooms, such as tomatoes and blueberries, which have been found to have larger fruits and increased fruit set when buzz-pollinated compared with other forms of pollination. 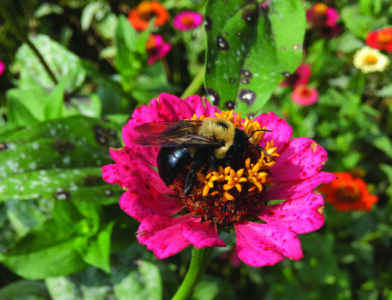 These large bees are true North American pollinator heroes, picking up the slack in cold and inclement weather that can blast other insects out of the sky. Some native bees are specialists and are particularly powerful at pollinating certain plants, including squash bees, which excel at pollinating anything in the squash family, including zucchini. Most of the time, these animals are only looking for one thing in order to settle down close to your garden: a place to call home. 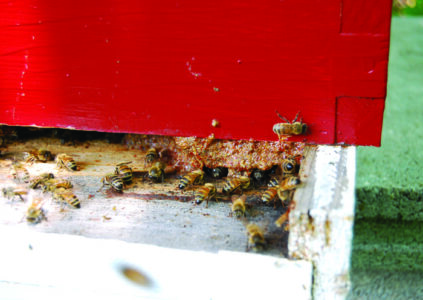 Honeybees are often the first insect people think of when pollination comes to mind. In most cases, the bees native to an area are invisible cogs that pick up the slack in pollination. Honeybees aren’t native to North America and were first brought to the continent in the 1600s by European colonists. Recent research has shown they can be detrimental to the native insects around them, often acting like an invasive species when their numbers get too high. One honeybee hive in the height of summer can easily have 50,000 bees; by contrast, the majority of native bees are mostly solitary and live by themselves. Even our social bees, such as bumbles, only have small colonies consisting of a few hundred individuals at most. It can be difficult for native pollinators to compete for floral resources when dealing with too many honeybees in the ecosystem, not to mention the pests and diseases honeybees can spread to certain native species.

Honeybees pale in comparison to the pollination power of native bees. For example, a handful of mason bees can do the work of hundreds of honeybees, especially in fruit orchards. Native bees are also the most effective pollinators for native plants, because of the close relationships they’ve formed with them. 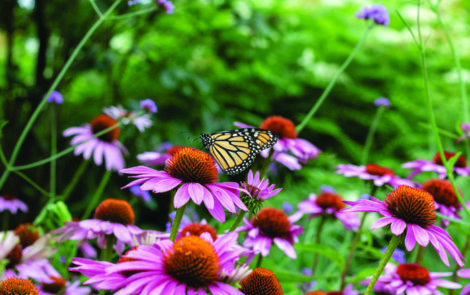 Regardless of the gardening method you choose–be it raised beds, raised rows, or otherwise–it’s important to increase the diversity of the plants you grow while simultaneously reducing the amount of tilling you perform. Diversity in your plantings is key in minimizing the spread of pests and diseases while also giving the widest amount of beneficial wildlife a place to eat and sleep. It’s also important to maintain the overall health of the space. Recent studies by the Technical University of Munich revealed that as the diversity of plants in grasslands increases, the energy-use efficiency of the entire ecosystem increases accordingly. 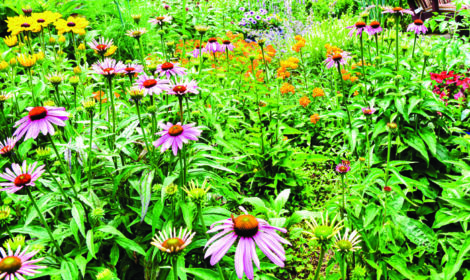 The same can be assumed true for other areas as well. When you’re diversifying your plantings, try to use plants native to your area whenever possible. Not only are native plants better acclimated to your local climate and soil conditions than non-natives, requiring much less long-term maintenance, but they also cater to the needs of local beneficial wildlife. In fact, researchers at the University of Delaware and the Smithsonian Migratory Bird Center found that once a landscape drops below 70% native plants, it’s no longer able to support enough insects to feed insectivorous birds, such as chickadees. 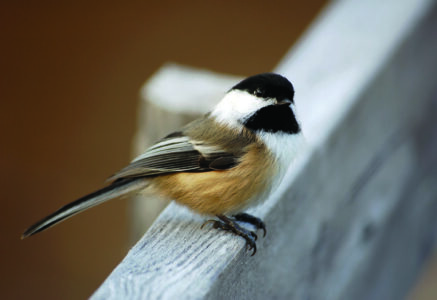 For a planted garden space, consider many of your plantings to be among the 30% of non-natives allowed for the property. Try and plant at least twice as many plants native to your area in and around your garden to feed and house your neighborhood birds and other insect eaters. A good deal of important pollinators and predators, such as fireflies and most solitary bees, can and will dig right in and make themselves at home in the soil among your plants. It’s important to leave areas of bare soil around the garden, or at least sparse mulch, to give these animals access to the ground. Tilling can disrupt solitary bee nests, and repeated soil excavations can wreak havoc on beneficial microbes in the soil, hamstringing your efforts to grow the best crop possible. Raised rows are a favorite gardening method of ours, because they remove the need for tilling in all but the most drastic of circumstances. 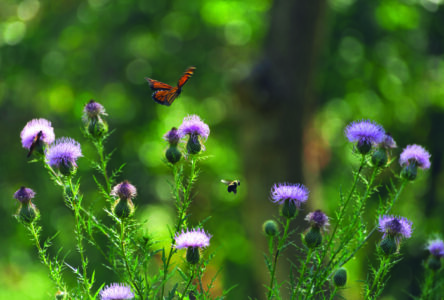 By planting a wide diversity of plants native to your area in and around your garden, you’ll be amazed by the number of pollinators that are able to return to the space long-term, rather than simply passing through. This same idea also holds true for wasps and other insect predators, which will work wonders at controlling populations of pests all on their own. Studies have found that many of these ancient animals are deeply impacted by contact with pesticides of all forms, be it insecticide, herbicide, fungicide, or other. For this reason, try to stop using pesticides and instead rely on attracting beneficial insects such as native predators to combat any pest outbreaks. The power of a properly functioning ecosystem far surpasses the short-term benefits found at the bottom of a bottle. 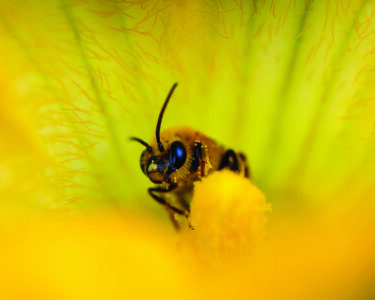 Brannen Basham and Jill Jacobs own Spriggly’s Beescaping, a nature education and habitat restoration business in western North Carolina that offers online educational courses, along with virtual and in-person pollinator-focused landscaping-design services. Beyond writing for various publications, Spriggly’s has published a nonfiction book of nature articles, A Guide to the Wonderful World Around Us, and a children’s book, Finding Home: A Story of a Mason Bee. Learn more at Spriggly’s Beescaping. 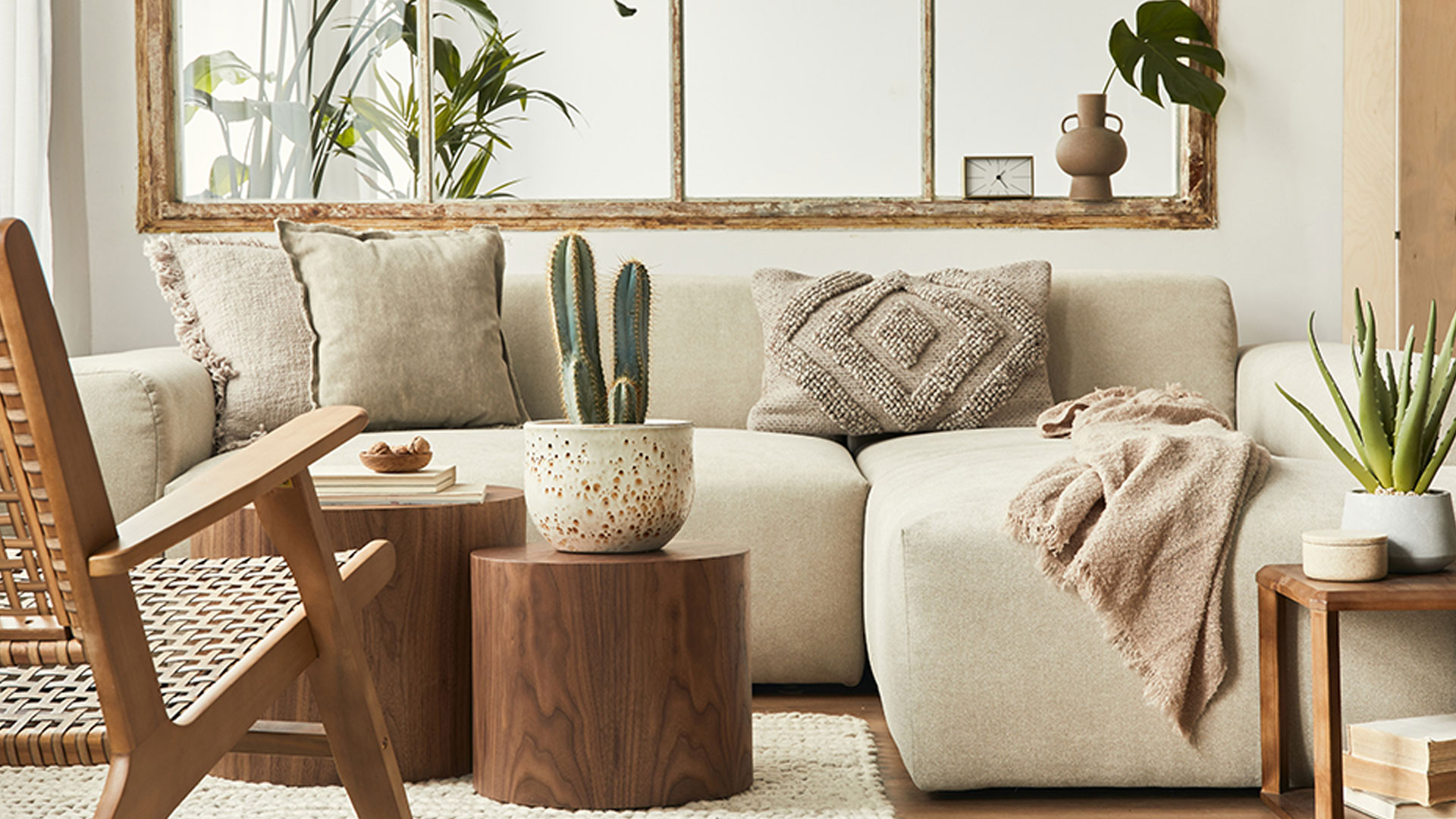