Designers for Upper Arlington’s first community center expect to unveil final plans for the facility in February after they work through the configuration of parking and the overall height of the building.

After collecting public feedback and working with city officials since August, representatives from MSA Sport are closing in on the design of a 155,300-square-foot facility that will house a 95,300-square-foot community center.

In the meantime, Hall said, the firm will work with focus groups of Upper Arlington residents to further discuss the long-term sustainability of the facility, as well as its accessibility to people of various abilities, aquatics programming and programming for seniors and teens.

MSA Sport representatives are working to determine which of two plans should be selected.

“By putting the parking underground, we can actually lower the height of the overall building,” said Katie Freeman, an associate principal with MSA Sport and director of its Columbus studio.

Scheme A, which calls for street-level parking, tentatively would feature:

• First floor: a plaza, a swimming pool and a child-watch area

• Sixth floor: fitness space and a 1/6 of a mile track

• Seventh floor: a multiuse space and an outdoor deck

Hall said a disadvantage to street-level parking “is that it pushes programming space up in the building.”

The advantages of scheme A, he said, is parking would be “right up next to the building” and users would get a longer track. However, he said that the design “consolidates a lot of the tenant buildout space.”

Scheme B, the underground parking option, calls for:

“By pushing the parking down one level and the advantage of gaining that extra square footage at grade level for program space, that allows us to push the building down a floor,” Hall said. “We feel like (with scheme B) we’ve got really great organization to the building.

“We can integrate OSU and all those other tenants to this facility, as well as spaces being integrated into it.”

While the fifth-floor gyms would be the same size as the Upper Arlington High School gym and would allow for activities such as basketball, pickleball and volleyball, Hall said the gym on the third floor in scheme B would be a multiuse gym with a rubberized surface that could be used for those activities and events for the community and the building’s tenants.

“The (multiuse) gym is also going to be used by the (building) partners quite a bit for physical therapy,” he said.

Schoeny said scheme B provides more of the multigenerational components that he prefers for the community center.

“One thing we talked about with the partners is the importance of having this entire building feel like one facility and not a community center sandwich. The more we thought about how the community center should flow, we can get the benefits of having people move throughout the building and deal with some of the, ‘Well, why isn’t the gym on this floor?’ with some signage and wayfinding.”

City officials expect the community center to open in 2024.

The city intends to pay off the debt using tax-increment financing revenue generated by Continental Real Estate Cos., Kingsdale mixed-used development and other TIF districts around Upper Arlington’s annual hotel/motel revenues, plus rent and income-tax revenue generated by the office spaces that will be located in the community center building.

Fri Nov 26 , 2021
I’m not sure who holds the title of hotel-bathroom design guru for the current generation, but I hope whoever it is will take a moment to think about the true practicality of maneuvering around a hotel bathroom. There are designers out there who need a lesson about planning, if my recent experiences as a guest are any indication.  Now, I understand that hardware for showering and bathing is always […] 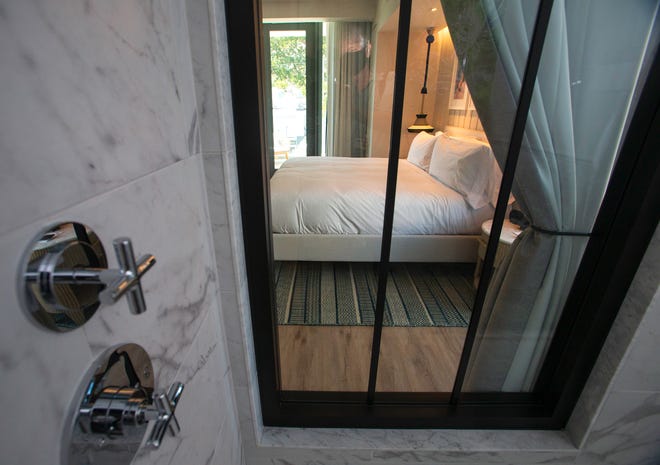