After years of working in the interior design industry, two things became clear to Diana Adams. The first was that, just like interior designers themselves, decor and furniture makers were artists, too. The second was that a lot of materials often go to waste when executing a project. “They don’t teach you in school that you can make a business out of art,” she tells Business of Home. 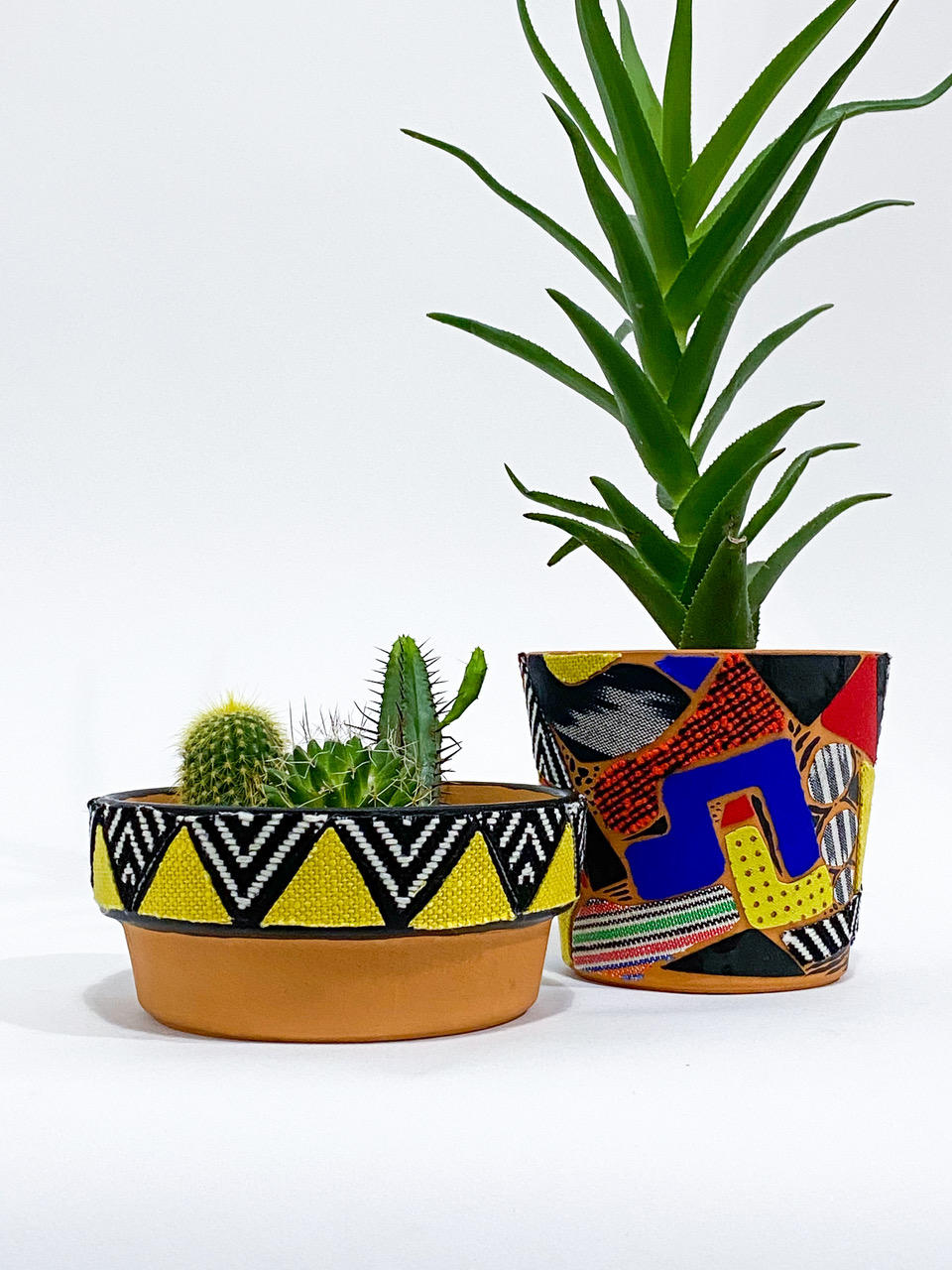 Born and raised in Los Angeles, Adams always considered herself an artist. “I’ve been drawing since elementary school,” she says. “However, once I got to college, I felt I had to pick a degree that would ensure I earned a living.”

For Adams, this meant majoring in biology at California State University, Dominguez Hills before opting to follow her heart. “I remember walking to my car after classes and passing the art department. I wanted to be there so badly,” she says. “ So I said ‘Screw it’ and signed up for painting and ceramics courses. The first time I touched clay something just clicked—I bought a wheel and started practicing making pottery at home.”

But her calling still hadn’t sunk in just yet. After graduating, Adams took a day job at Apple that left her feeling creatively unfulfilled, so she decided to pursue a masters degree in interior architecture offered collaboratively between UCLA Extension and California State Polytechnic University, Pomona. The education led to a full-time gig with designer Michael Smith. “I was immersed in materials—fabrics, stones, and woods—and started to see the artistic value of decor,” she says. “Then it finally hit me: This is how you make a living making art.” 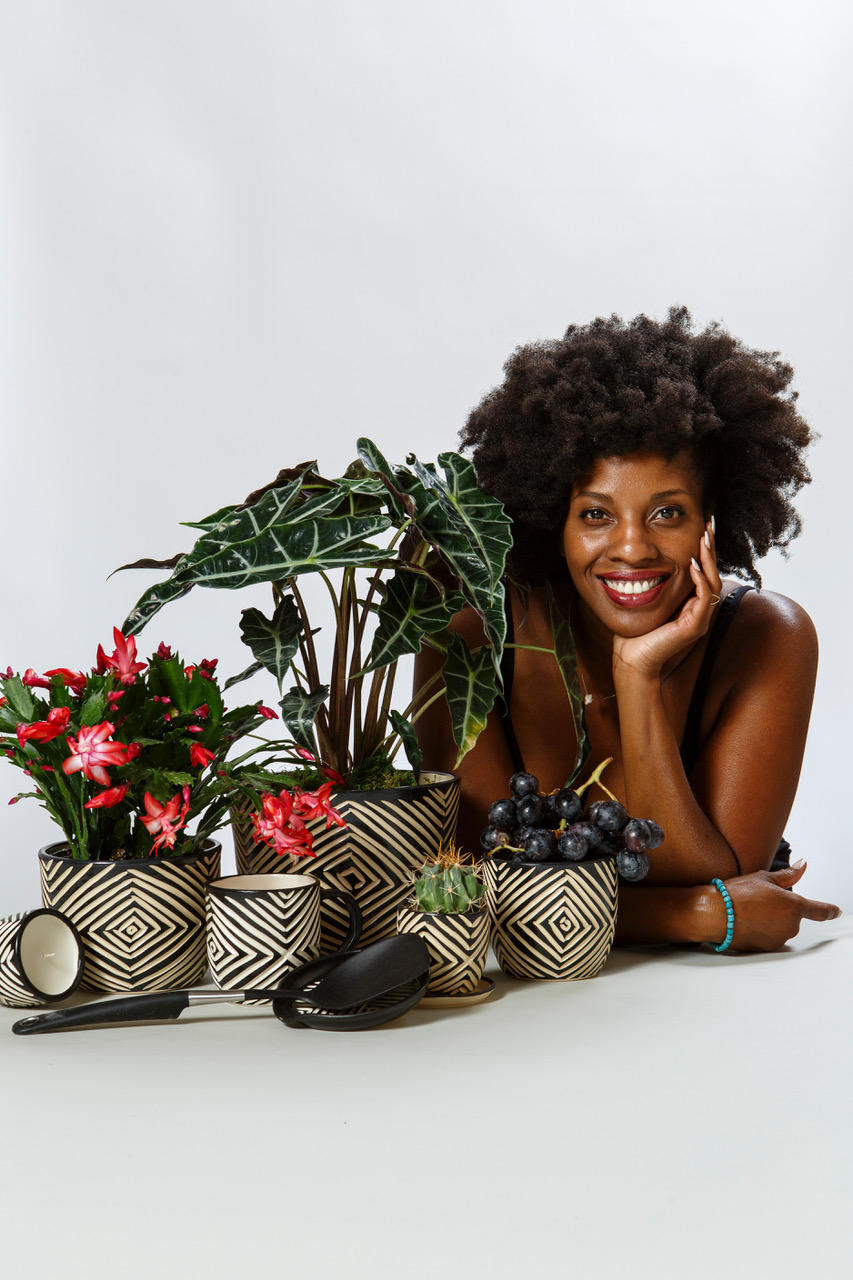 Diana Adams with selections from the Zulu collection in onyx

In 2019, she opened SampleHaus, the Hawthorne, California–based studio where she upcycles discarded swatches and samples from showrooms into heirloom-worthy collages. “I started contacting local vendors about salvaging their scrapped materials,” she explains. “Then I would turn them into artworks that I sold at various popup shops in the area.”

Once she got her feet wet selling collages, Adams decided to turn her attention back to pottery. She signed up for a ceramics class at a local studio to brush up her skills, and fell head over heels for centuries-old tribal designs. “I love how different pottery markings symbolize different cultures,” she says. “There’s a universal language of pottery that’s conveyed through distinct engravings.”

More specifically, she was smitten with African Zulu pottery, marked by bold geometric linework and vibrant enamel finishes, and began incorporating the motifs into her own handthrown ceramic creations. “I made lidded jars with markings mimicking the ones found on traditional tribal shields,” she explains. “And when applicable, also integrated salvaged fabric into the designs.”

When the pandemic hit, Adams says demand for her colorful ceramic confections skyrocketed. “Suddenly, people started requesting planters, mugs and other functional housewares,” she says. “So I shifted my focus to pottery, and developing my Zulu collection.”

Adams describes her process as intuitive, with no concrete sketches to guide at the wheel—just her memory. “I hand-throw objects on the wheel by heart,” she says. “I take measurements so they’re consistent in size, and then trim, carve and underglaze them before they go in the kiln for the first firing.”

Her signature palette for the Zulu series consists of yellow, black, and white finishes, with each respective glaze corresponding to a specific pattern. “Family members often help me paint so it feels like a collaborative process,” she says.

Looking ahead, Adams plans on expanding her popular Zulu line with new colorways, as well as lighting and dinnerware designs. She also hopes to release a fresh crop of collages, composed, of course, of materials once destined for the trash. “I want to continue making art that speaks to people,” she says, “but that also feels good to my soul.”

Tue Mar 1 , 2022
We earn a commission for products purchased through some links in this article. When planning a kitchen, you’re likely to be inundated with new terms and jargon which, quite frankly, can be rather overwhelming. One term you’re bound to come across is the kitchen triangle rule. But what […]