When Curtis Short and his wife Patricia Seddon first saw the space where they were asked to help young adults with special needs and disabilities create a garden, they were dismayed. The small fenced area was a tangle of weeds, with only a rose bush and several small fruit trees — plum, apricot and pomegranate — pushing through the thick Bermuda grass.

Surrounding it were parking lots, cracked and weedy asphalt and maintenance and office buildings for the Santa Rosa City Schools. The students, part of a multiyear program teaching independent living and vocational skills, had their classes in old, weathered portable classrooms. The 10 students in teacher Melanie Charter’s class often ate lunch in the “garden,” taking turns sitting at the single picnic table.

Short and Seddon couldn’t do anything about the ambiance. But they figured they could help the students create an oasis amid the functional but forlorn space at the end of Ridgway Avenue.

“Our youngest child moved away to college Sept. 9, 2021,” Short said. “As empty nesters in need of a new purpose in life, Pat and I were immediately struck by the sad look of the existing garden and surroundings there, and we became almost instantly committed to building a wonderful new garden,” he said.

Short, a certified arborist and landscape contractor, connected with Charter through a mutual friend who had asked if he could help the teacher create a gardening program for her students.

The 18-to 22-year-olds, all alumni of Ridgway, the district’s continuation high school, are engaged in a variety of volunteer and apprentice jobs through the Community Transitions program, doing everything from food service at Sonoma State University to helping out at a school childcare program and volunteering at the Humane Society.

“With support from any of three classroom staff, students participate in paid and volunteer work experiences,” Charter said. Alongside that, they learn independent living skills like meal preparation, budgeting, home maintenance and how to get around to shop or socialize.

“The goal is for students to exit the program with as much independence as possible and with resources and connections in the community to support them,” she said.

A garden program could build additional skills, like teamwork and basic garden maintenance, Charter said. There are currently 30 students spread among three classes who need additional support as a bridge between school and living and working in the community. While much of their work is out in the community, they do have classroom time on their makeshift campus within view of Santa Rosa High.

“We wanted to give them a chance to build a beautiful new environment for themselves that they can be inspired by and thrive in,” Short said. “And it’s such a great program. These students get to be in this program for four years. And it is individually tailored to whatever sparks their enthusiasm. Pat and I had no idea something like these even existed in the Santa Rosa Public Schools.”

Plans and then waiting

Short sketched a plan for the garden, and Seddon set about fundraising.

“I said we don’t need that much, but they said, ‘Take it.’ They were incredibly generous and gave us a huge pile of seed,” Short said of the locally owned Prickett’s.

So Short and Seddon worked alone all autumn and into the winter, prepping the area, digging out weeds and installing a rock culvert, or rain garden, to capture runoff from the parking lot that had been pooling in the garden. At the same time, they identified tasks the students could easily do on their own, like removing rocks and picking sticks out of the mulch to prepare it for spreading.

After more than four months, Short and Seddon now have the green light to work directly with the students. They met with them for the first time on a sunny Wednesday in late January, digging and moving wood chips to what will, by the end of summer, be the bones of an ornamental flower garden.

“I like the outside, working in the garden and pulling up weeds,” said Dixie Ireland. The 21-year-old Santa Rosa woman also works at the YMCA, at a day care center at Steele Lane Elementary and as a volunteer at the Sonoma County Humane Society as part of her Transitions training. But the garden makes a nice new addition to the mix of experiences.

Their home design brings a bit of Prague, and a dash of Delhi, to Revere new construction

Fri Feb 11 , 2022
“One loves warm, layered looks in rich golds,” Fulmer says. “The other prefers a minimalist approach that skews more European.” However, they could agree that furniture profiles would be light and airy; neither wanted pieces with heavy wooden bases. Designer Trevor Fulmer opted for an organically shaped cowhide rug under […] 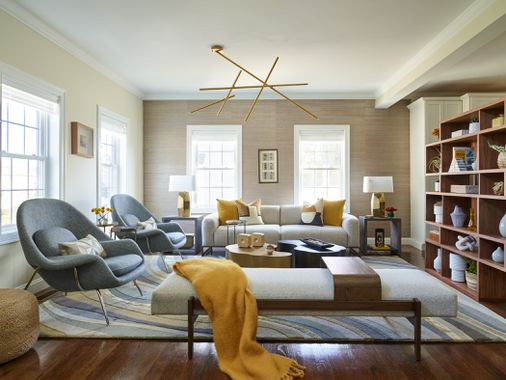