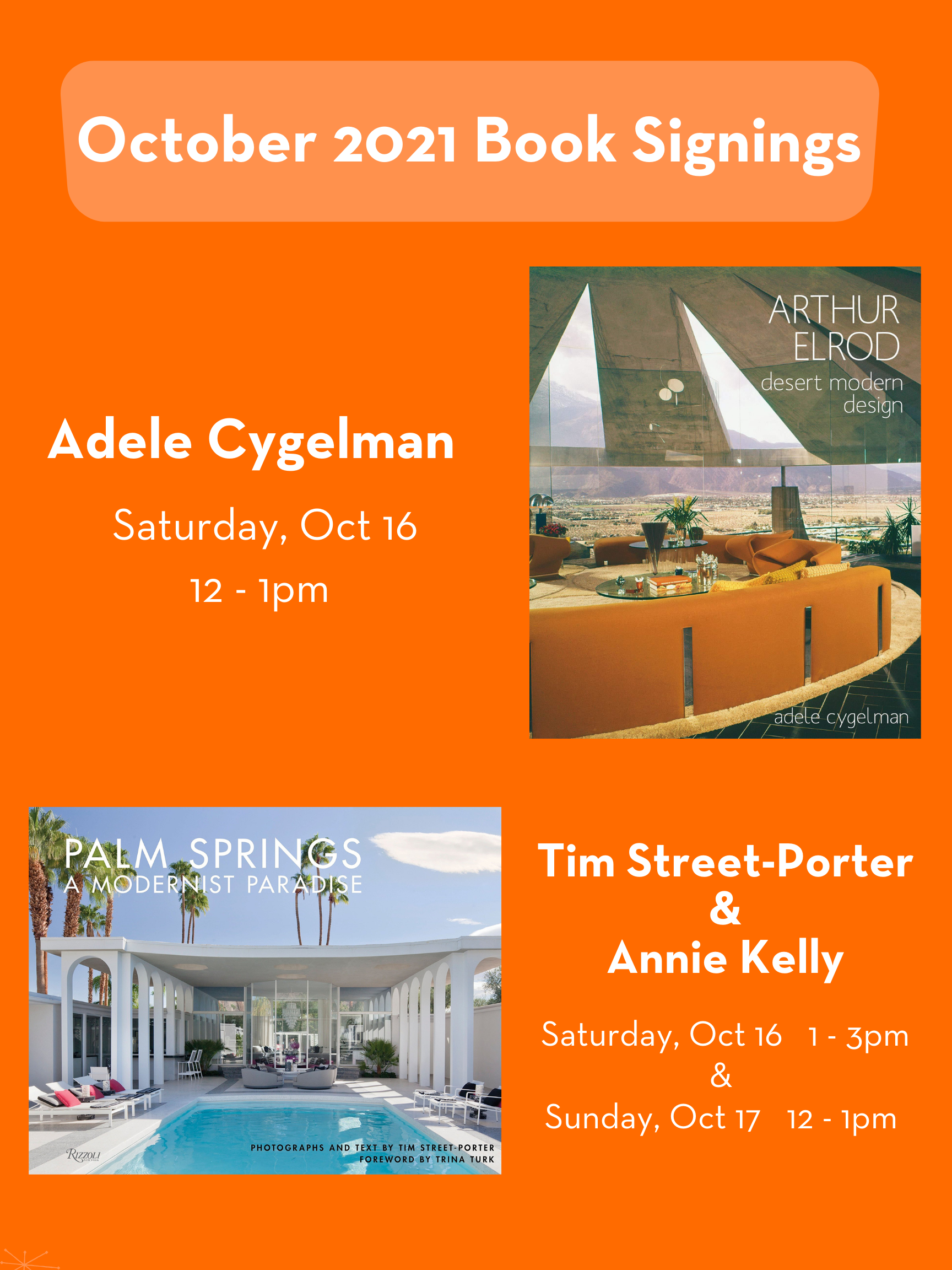 Arthur Elrod was the most successful interior designer based in Palm Springs from 1954 to 1974. Working tirelessly for his A-list clientele such as Lucille Ball and Walt Disney, Elrod utilized his forward thinking Mid-Century designs in many homes, country clubs, and experimental house in the Coachella Valley and across the United States. In fact, the “Elrod House” designed by renowned architect John Lautner for Elrod’s personal residence, remains one of the most famous and iconic structures in Palm Springs today. In this beautiful coffee table book – the first monograph ever written about Elrod – author Adele Cygelman explores Elrod’s life and work until his untimely tragic death at the height of his career.

Cygelman is a longtime writer and editor who has covered interior design, architecture, and real estate for numerous magazines, including Architectural Digest and Robb Report. She is also the author of the best seller Palm Springs Modern which recently celebrated its 20th anniversary.

Palm Springs: A Modernist Paradise is not only our best selling book on Palm Springs, it is by far the most beautiful and our Just Fabulous favorite pick year round. Tim’s beautiful photographs provide the reader with access to private homes and never-before seen modernist architecture in the desert by legends such as Richard Neutra, Albert Frey and Paul Williams.

Published in February 2021 is Tim and Annie’s most recent coffee table book which provides a fresh look at this incomparable city. Tim’s stunning photographs chronicle today’s vibrant buildings, coastline and gardens of this glamorous global metropolis. Stylish museums, such as the Broad, and a flourishing Arts District illustrate the explosive art scene, while Hollywood’s Chateau Marmont and the historic Beverly Hills neighborhood add a chic dynamism. Across town, Culver City, home to the tech industry, features blocks of futuristic architecture by Eric Owen Moss. Modernist homes by Richard Neutra and John Lautner, as well as Frank Lloyd Wright’s Hollyhock House, are shown against dramatic backdrops of sky and sea. This tome is a “must-have” for lovers of architecture and design, as well as Los Angeles itself.

Splash: The Art of the Swimming Pool by Tim Street-Porter and Annie Kelly

Splash: The Art of the Swimming Pool provides the inspiration for anyone designing, or dreaming about, their own pool. With this coffee table book and its more than 200 glamorous photographs, Tim and Annie delve into the art of the pool — celebrating the style, design and pure joy that pools bring to us. From glimmering infinity pools with a view of the ocean to dramatic cascading waterfall pools and those in lush garden settings, the stunning locales chosen by the authors show creative examples of pools as architecture and organic forms.

Leading architecture and design photographer Tim Street-Porter has written and photographed numerous books, including Los Angeles and L.A. Modern. He is also a contributor to many lifestyle magazines such as Architectural Digest, House Beautiful, Elle Decor, Vanity Fair, and the New York Times. Writer and designer Annie Kelly has authored many books, including the successful Rooms to Inspire series. She writes about lifestyle for such publications as Belle and the Los Angeles Times. She is also a decorator whose work has been included in Architectural Digest, House and Garden, House Beautiful, Traditional Home, Elle Decor, and World of Interiors. 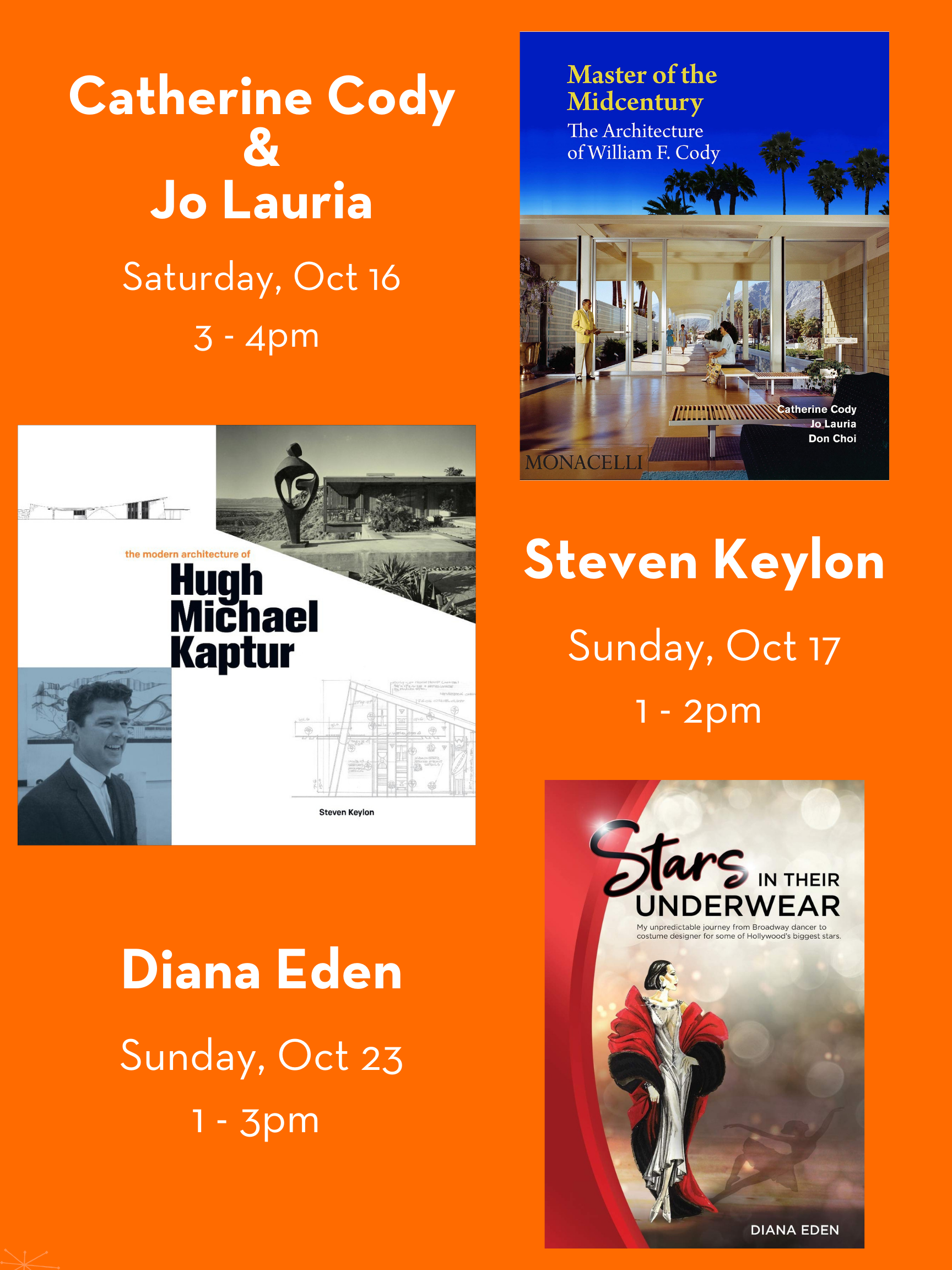 Master of the Midcentury: The Architecture of William F. Cody by Catherine Cody, Jo Lauria, and Don Choi

Of the architects who made Palm Springs a crucible of midcentury American modernism, William F. Cody (1916-1978) was one of the most prolific, diverse, and iconic. Directing a practice ranging from residences to commercial centers and industrial complexes to master plans, Cody’s designs are so recognizable that they provide visual shorthand for what is widely hailed as “Desert Modern.”

From icons like the Del Marcos Hotel (1946), to inventive country clubs like the Eldorado (1957), to houses for celebrities (Frank Sinatra, Bing Crosby, Walt Disney), Cody’s projects defined the emerging West Coast lifestyle that combined luxury, leisure, and experimental design. Cody also pushed the boundaries of engineering, with beams and roof slabs so thin that his buildings seemed to defy gravity.

Master of the Midcentury is the first monograph devoted to Cody, authored by the team that curated the acclaimed exhibition Fast Forward: The Architecture of William F. Cody at the Architecture and Design Museum in Los Angeles: his daughter, Cathy Cody, design historian Jo Lauria, and architectural historian Don Choi. Replete with photographs of extant and now-lost structures, as well as masterful color renderings and drawings for architectural commissions and plans for vanguard building systems, Master of the Midcentury is the authoritative resource on Cody.

The Modern Architecture of Hugh Michael Kaptur, by architectural historian and PSPF board member Steven Keylon

The book explores the life and many-faceted career of Palm Springs architect Hugh M. Kaptur. Kaptur, the last remaining architect of the legendary school of Palm Springs Modern architects, began his career working as a designer at General Motors in Detroit, before arriving in Palm Springs in 1956, just as the first wave of modernist design was taking off. He worked first with architect Donald Wexler before launching his own career.

Designed by graphic artist Gary Wexler, the book is lavishly illustrated with drawings from the Palm Springs Art Museum, Architecture and Design Center archives, as well as never before seen photos and renderings from Kaptur’s own personal archives.

Stars in Their Underwear: My Unpredictable Journey From Broadway Dancer to Costume Designer for some of Hollywood’s Biggest Stars by Diana Eden

Just Fabulous is pleased to host Emmy-nominated costume designer Diana Eden whose aptly named memoir is filled with celebrity tidbits about her life as a dancer, actress and acclaimed costume designer for many “stars”, including Diana Ross, George Clooney, Betty White, Ann-Margaret to name just a few. Diana learned and honed her craft as an assistant to the legendary Bob Mackie and went on to have a fabulous career in film and tv. In this memoir, she shares her experiences from the heart of numerous history-making events including Lyndon Johnson’s inauguration; the infamous Diana Ross concert in Central Park, the MGM fire of 1980 and appearances in iconic films such as The Producers and Valley of the Dolls.

Wed Oct 6 , 2021
Each week, Mansion Global tackles a topic with an elite group of designers from around the world who work on luxury properties. This week, we look at tips for using nude colors in your bathroom. Neutral-colored bathrooms run the gamut. Materials may range from showers clad in honed white marble […] 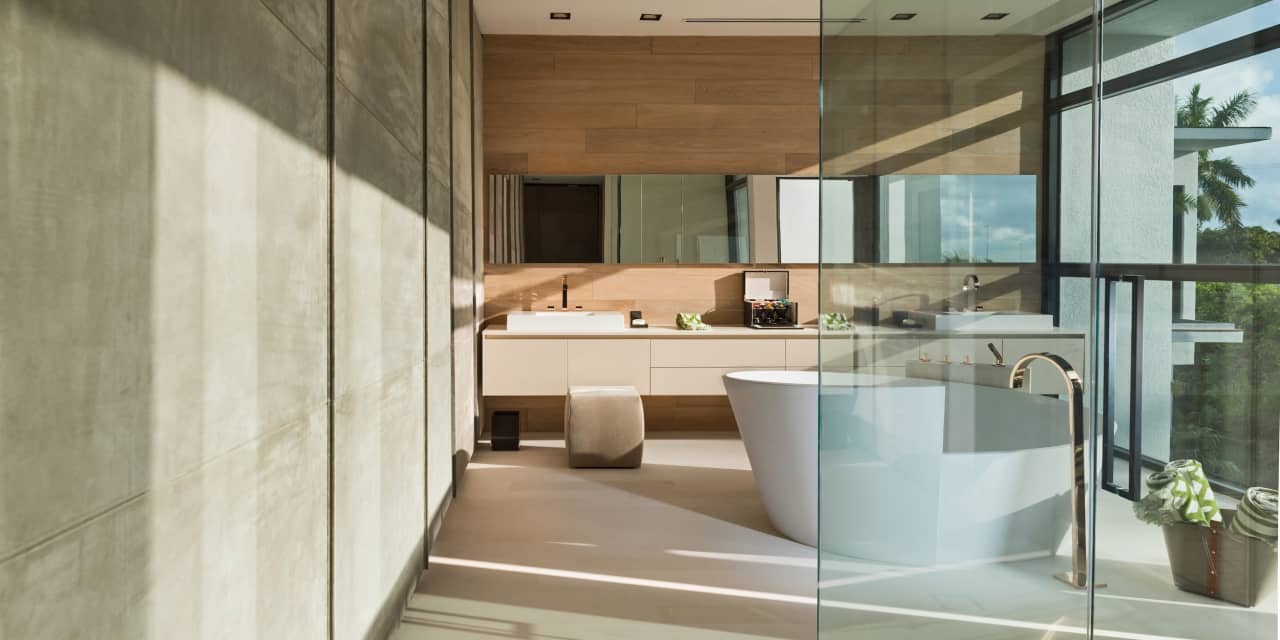