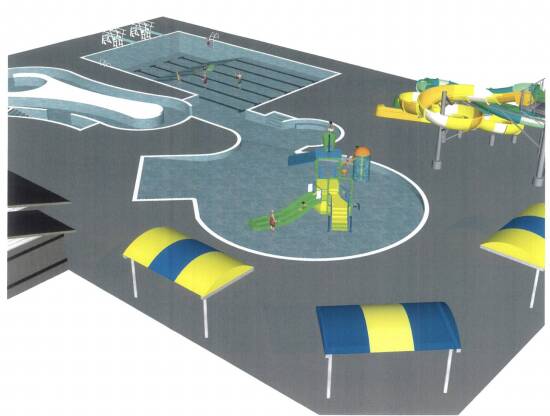 The plan recommended by the pool committee.

McCOOK, Neb.  The McCook Swimming Pool Committee will recommend to the McCook City Council a design for a new pool, at the regular council meeting Monday, 5:30 p.m., at city council chambers at the Municipal Building.

Earlier this year, the council closed the city swimming pool for the summer, citing safety concerns to employees due to aging equipment.

The McCook Swimming Pool Committee met Tuesday and the majority voted for a revised version of Concept 3 at $6 million. For cost savings and to provide competitive swimming lanes that could double as a large free swim area, the committee recommended eliminating the slide feature.

Also on the regular agenda, the council will be asked to deny a request from Scott Snyder to purchase property in Kelley Creek owned by the city. According to the city managers report for Mondays meeting, a 15-inch sewer main that collects a large amount of sewage runs through the property and theres concern that if the property is sold, access to the line would be hindered.

Other items on the regular agenda include:

-Approve the emergency purchase, bypassing the usual bidding process, of a used, commercial 4 by 4 brush truck for the fire department at $57.750, due to supply chain issues. With the recent wildfires, it has become an immediate priority to add additional apparatus to the citys fire department to meet the demands the community may need, according to the city managers report. This truck can pump water while navigating areas inaccessible to current firefighting apparatus. The truck will be paid for with $40,429 from the Health Resources and Services Administration Provider Relief Fund (HRSA), with the rest of the funds coming from the city budget under the Fire Apparatus Replacement account.

— Select a date for a joint meeting of the council and the McCook Planning Commission to discuss potential annexation with property owners who live south of McCook Industrial Park, along Ravenswood Road and property owners adjacent to West Third Street, north of West Second.

–Discuss and approve the 2022-23 budget schedule

Items on the consent agenda can be approved in one motion, unless pulled by a council member, city staff or a member of the public for a separate discussion/vote the council. Consent agenda items for Monday are:

-Approve three applications for special designated liquor licenses submitted by the following: Citta Deli for two events: a fair concert at Red Willow County Outdoor Arena & Grandstands on Friday, July 22, 2022, from 9 a.m. – 1 a.m., with an alternate location of the Alice Kiplinger Building, 1412 West 5th Street; and for Farrells Sip n Shop event at Farrells Hallmark Shop, 116 West B Street, on Friday, July 8, 2022, from 1-8 p.m.; and from HoJos Hideaway for a wedding reception at the McCook Municipal Auditorium, 302 West 5th Street, on Saturday, July 9, 2022, from 5 p.m. to 12 a.m.

The meeting will begin Monday night with a public hearing for a report from the May 23, 2022 meeting of the Economic Development Plan Citizens Advisory Review Committee.

Two closed, executive sessions are planned at the end of Mondays meeting. One is for collective bargaining concerning the Fraternal Order of Police Lodge 57, the union of the citys police officers. The second is for a strategy session on litigation for a notice of appeal from SBA Towers IV, LLC, on the special exception the council gave to Parallel Infrastructure for a telecommunications tower.

Sun Jun 5 , 2022
Having a stylish bathroom will not only improve your experience when you’re enjoying a relaxing soak in the tub, but it can also help to increase the overall value of your property. This is why upgrading your bathroom can be one of the most beneficial home improvement projects to take […]