RALEIGH – The median home sale price in Wake County in the month of June was $383,000, according to a new analysis of real estate data conducted by the Wake County Register of Deeds, and Triangle-wide, homes are selling for about 20% more now than a year ago.

But that doesn’t necessarily mean more homeowners plan to list their property for sale to take advantage of, potentially, higher sale prices.

That’s because, not only is the median home sale price increasing— from $328,750 in January, or an increase of 16.5% during that time—a significant number of homeowners are choosing to refinance, rather than list their property.

The analysis from the Register of Deeds office found that, in Wake County, real estate lending activity in June 2021 rose 7% compared to the prior month, but was down 7.1% compared to June 2020. 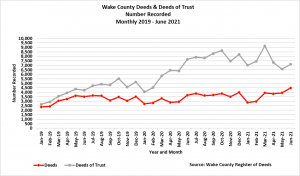 The chart provided by the Wake County Register of Deeds shows a significant increase in the second type of lending activity, that is, in the filing of deeds of trust without an ownership change.

Since a baseline period prior to the onset of the global coronavirus pandemic, there’s an increasing gap that quantifies increasing strength in the mortgage refinance market, the analysis of the data shows. “The gap between the two remains consistently wide,” the analysis concludes.

During the second half of 2020 and through the first half of 2021, refinancing increased for an easy-to-understand reason, said said Brad Benham, vice president and senior mortgage loan officer at Towne Mortgage of the Carolinas: rates dropped further, making a refinance more beneficial to more homeowners.

“Since values of homes have increased, some homeowners may have decided to do a cash-out refinance to consolidate debt or do home renovations,” said Benham.  But with inventory so low across the Triangle, prospective buyers who would sell their current property originally may not have considered refinancing, as they may have planned on selling their current home, noted Benham.  “However, with inventory levels making it harder for people to find their new home they may have decided to go ahead and refinance into a lower rate and stay in their current home a little bit longer.”

This gap doesn’t mean there are less buyers interested in purchasing property.  According to data released this week by ShowingTime, a technology company used to coordinate real estate showings, the Triangle is among the real estate markets where the most average numbers of showings are occurring in the first five days following a property becoming available on the market.  According to their data, homes in Raleigh are still seeing as many as 30 showings in the first five days, indicating demand is still high, even as supply remains low.  The Triangle also ranks in the top five real estate markets nationally for the percentage change in average days on market, another measure of demand, dropping nearly 60% year-over-year, and now sits at 19 days, according to a new report from RE/MAX.

There’s also a gap in the market when it comes to the purchase or sale of property, new research from Opendoor revealed.  The analysis of survey data from Opendoor, which is an iBuyer active in Raleigh, Durham, and Charlotte, all among the top regions where iBuying is highest in the country, shows that while 85% of people believe it’s a good time to sell a house, only 36% believe it’s a good time to buy one.

“With Google, Apple and other tech firms’ recent announcements about adding Raleigh-Durham offices, buyer demand will only increase,” said Jon Enberg, Opendoor’s regional general manager.  “Market supply is at an all-time low and new construction as well as resale supply is not keeping pace.”

Those jobs, as well as newly announced jobs in biotechnology and the life sciences, are announced with higher-than-median salaries, said Enberg, which is giving some buyers higher purchasing power.  Meanwhile, out-of-state movers are relocating to the Triangle and can get more house for less money than their cities of departure.

That means that many of movers, responding to a competitive housing market in the Triangle, are making all-cash offers on property, which recent data from the National Association of Realtors shows is happening primarily for buyers intending to make the house their primary residence.

“All of these factors are making it tough for buyers to find another home, which is leading to many using their excess cash to invest in improving their current home,” said Enberg.  To find that cash, some owners are deciding or have already decided to refinance their mortgages or take out secured lines of credit against their home, the data from the Wake County Register of Deeds suggests.

“This can lead to stronger returns on investment when they are ready to sell given the continued demand for housing,” said Enberg.

The options for homeowners who are looking to buy a new primary residence now may also include holding on to their current property and turning it into a rental property, said Benham.  That’s because they may be able to refinance into a lower rate, he noted.  That could result in an owner-turned-landlord paying less monthly in repayment of the new mortgage, and yield high rental rate income due to increasing rental rate inflation.

“Some homeowners to hold on to their property as an investment property rather than sell it when they want to move into a new home since the rate on the existing mortgage is very low,” said Benham.  “The impact on inventory is more a situation that sellers fear not being able to find another home if they put their home on the market,” he noted.

Fri Jul 23 , 2021
He came from a famous musical household in Clare, with both of his dad and mom, two of his brothers , and his son Damien all inheriting the musical gene. A multiple All-Ireland winner in his youth, he was included on a number of recordings through the years, and had […]