Ivan Katz from Great Lakes Landscape Design in Oak Park kicked off the virtual party by sharing his own Huntington Woods home to give tips on creating an outdoor oasis.

He talked about using rocks and different plants to give a variety of textures and colors at different times of the day and season. He explained that front yards like his, which is mostly plants and trees rather than grass, can be more sustainable.

“Plants don’t need as much water as a lawn does,” he said, adding that they don’t need the same chemicals or fertilizers, either.

Katz, who has been in this business for 32 years, saved the best for last with his cool backyard that is custom-built for entertaining with an outdoor kitchen with a grill, ambient light, a dining area and a giant stone fireplace among the Japanese maple trees.

He also highlighted the benefits of synthetic turf outside, which is pet-friendly and doesn’t need watering or much maintenance at all. Instead he can focus on tending his elevated vegetable garden, which he likes because he doesn’t have to bend over and it’s out of the reach of pets and wild animals.

“Your outdoor is an extension of your indoor,” he said, adding that he’s constantly tweaking and adding things to the backyard and that using it as a space to entertain has grown in popularity during the pandemic. “Really, our backyard is extremely functionable … it’s a great place to be.”

Next up, chef Junior Merino of M Cantina Latin restaurant in Dearborn showed the virtual audience of more than 100 viewers how to create some seasonal drinks and summer-y appetizers.

“Tequila drinks are beautiful in the summer,” he said, adding that he uses tequila that is 100% agave. “It’s extremely important … so the next day it’s not going to give you a headache. Always use 100% agave tequila. It has to say 100% agave on the bottle.”

Merino, who was born and raised in Puebla, Mexico, and is known as “the liquid chef,” has hundreds of drink recipes under his belt. The restaurant has been around for years serving nonalcoholic cocktails, and recently obtained a liquor license.

“We are really happy to serve people some of our crazy recipes,” he said. “We do have some really fruity and strong drinks but at the end of the day I look for the balance.”

He demonstrated how to mix up a “Dragonfly” cocktail, which is made with American vodka, Cointreau (an orange-flavoured triple sec liqueur), hibiscus syrup, white cranberry juice and lime juice. He also made “El Angel,” with mezcal, 100% tequila blanco, lime juice, orange juice and simple syrup.

All dishes featured ripe avocados. He said the best avocados for guacamole are medium sized. You can speed up the ripening process by putting them in a paper bag for a day and leave it somewhere warm.

“They have to be nice and firm but not too green and not too ripe,” he said, as he started to prepare the green fruit with a potato masher. “Here we always make sure we get the best ingredients and the best quality which is very important to me.”

He ended his demo saying that if you visit M Cantina, know that everything is made to order.

“We have over 30 different types of tacos,” he said. The restaurant is open for indoor dining at 50% capacity for the time being and reservations are suggested. Diners can also order carryout online.

Carol Peretto from Gardenviews at Home assured us it was OK to change things up with your decor and use things you would normally put inside around your outdoor spaces, and vice versa, like indoor-outdoor art. She also said it was OK to use faux florals if you are someone with a “brown thumb.” Fake succulents are especially popular because they look so real.

“You’ll probably get a season out of them, maybe two,” she said, adding that fake plants may lose color if they’re in direct sunlight outside, but spraying them with WD40 may help prevent that. She said when choosing synthetic flowers, go for those that look the best. She showed off some colorful tulips sold at Gardenviews, which look and feel real.

Like Katz touched on, Peretto championed the calming nature of a water feature, like a small fountain. She also pointed to a lot of vintage items, which she says she finds at garage sales, auctions and flea markets like the ones in Midland and elsewhere around Michigan.

“It’s a lot of looking and working to get these great pieces,” she said. Later she revealed she has a clawfoot bathtub in a shady area of her yard that she plants flowers in every year. “I like to have the unexpected.”

Find some unexpected decor ideas at Gardenviews at Home shop in the heart of downtown Northville.

Sat Jun 12 , 2021
| No, nobody’s been murdered (apart from maybe some eggs) on FOX’s Crime Scene Kitchen, but this kitchen is a crime scene that the teams of bakers-turned-CSIs have to decipher in order to re-create the dessert that was made. Teams of two compete in two rounds to piece together the […] 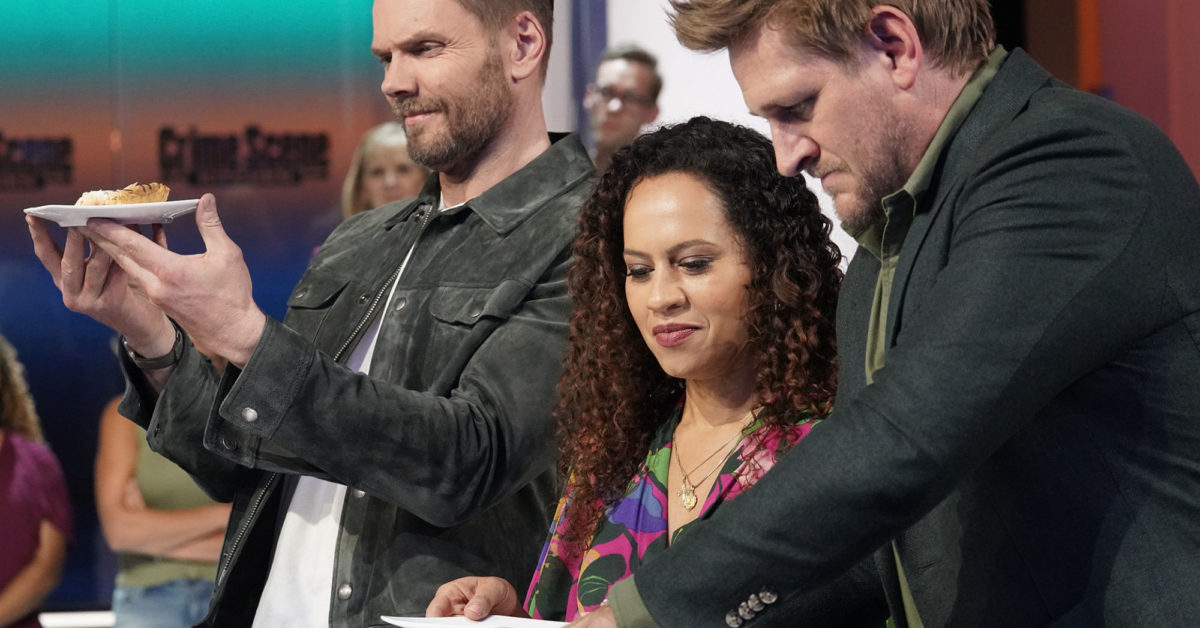