Plans for the hotel to replace the historic Naples Beach Hotel were granted final design approval last week by a 3-2 vote of the city’s Design Review Board.

After months of legal challenges, Naples Beach Hotel & Golf Club sold Oct. 14 for more than $362 million. The Athens Group and MSD Partners acquired the nearly 125-acre Gulf-front property in Naples for redevelopment of the Naples Beach Club with a 216-room hotel and resort managed by Four Seasons, up to 185 luxury residences and upscale club amenities. After being owned and operated for nearly 75 years by three generations of the Watkins family, the Beach Club permanently closed last May but its sale was delayed by legal challenges filed by Greg Myers, a neighbor on Gulf Shore Boulevard North, who opposes the redevelopment.

During the public comment period near the end of last week’s Design Review Board meeting, Myers threatened to name DRB members in a lawsuit if they approved the proposed plans because he said only City Council, not the DRB, is authorized to make changes to the resolution made in November 2019 regarding site plan deviations for the development. Myers deemed the entire process outrageous. “It is my position that no part of this 124-acre project is lawful,” he said. Subsequently, DRB members David Driapsa and Adriane Orion both voted no on the hotel design plans.

The hotel project was initially approved in 2018 by the DRB, which later rescinded its approval after inconsistencies found with the site plan deviations became a zoning matter. Since then, a kiddie pool that encroached on a front yard setback was removed, the hotel wing near the shore was narrowed and modifications were made to the transition between two outdoor swimming pools. Other adjustments were made to parking spaces outside of the hotel.

As part of the preliminary design review of the project in 2018, the DRB included 10 conditions to the approval, said Leslee Dulmer, the city’s deputy planning director. “Following that, the project went through entitlement, an extensive entitlement process, and then returned for final design approval in June of 2021 for the hotel property and the Market Square property,” Dulmer said. “Following that design review approval, some inconsistencies with the design and the entitlements, specifically the site plan with deviations approvals granted by City Council were identified, and in October this board rescinded and vacated those approvals for the hotel and for the Market Square properties.”

Since last summer, the petitioners completed a revision to their site plan proposal. In March, city staff found those changes sufficient, Dulmer said.

In addition to a new hotel, the developer plans to build luxury towers along both sides of Gulf Shore Boulevard as well as the Market Square public amenity space on the eastern side of the boulevard. The recent DRB petition submitted and approved was only for the hotel and did not include the property’s golf course, Market Square, beachfront condominiums proposed north of the hotel, property east of Gulf Shore Boulevard nor proposed renovations to HB’s on the Gulf restaurant.

Staff recommended two conditions for approval involving landscaping and signage. Renovations to HB’s and the adjacent Sunset Beach Bar & Grill will be considered under a separate petition at a later date, Dulmer said.

A construction timeline for the hotel has not been revealed yet. Some landscaping has already been cleared on the property and work is actively underway to secure demolition permits for the old hotel, said Leslie Neville, an associate principal at New York-based Hart Howerton architectural firm, who presented the architectural plans to the City Council-appointed volunteer board on March 30. Her presentation to the DRB provided an elaborate tour of the proposed 46,832-square-foot Naples Beach Club Four Seasons hotel to be built at the resort site on the southwest corner of Gulf Shore Boulevard North and Eighth Avenue North. The seven-story hotel, which will feature an iconic cupola, will step down to five stories nearest the Gulf.

“Our architectural approach to a building of this scale in this neighborhood is to break it down into traditional proportions and composition,” Neville said. “So, throughout, you’ll see an articulated base that is different from a middle portion of the building that is different from the topmost portion of the building, where we vary materials to break down the scale.”

Since the DRB gave preliminary approval of the plans in 2018, consideration has been given to a private rooftop garden off the presidential suite on the fifth level of the hotel’s south wing. On-site water quality issues have been addressed as well with a sustainable approach, Neville said. “We have thoroughly and holistically worked through smart water strategies, including the use of tertiary treated effluent for the golf course irrigation, exfiltration and percolation systems on the beach side so we can filter out a lot of the water and replenish the aquifer,” Neville said.

Green walls will be incorporated with some of the architecture in different areas and an innovative parking stacker system will be used in the valet garage below the public and guest room levels of the hotel. “The proposed buildings are of a quality and appearance that’s consistent and compatible with the surrounding neighborhoods,” Neville said. “The project’s scale, color and proportion are appropriate and harmonious with surrounding structures.”

Walking through the lobby off of Gulf Shore Boulevard North, guests will come to the Veranda, a new indoor restaurant space with a sizeable outdoor courtyard. The Veranda, which Neville described as a jewel box set within the composition of the hotel rooms above it, will have “playful details” such as elongated columns and striped fabric awnings.

A few steps down from the Veranda courtyard will be the rectangular main pool. Steps away, closer to the beach, will be an organically shaped family pool on the southwest corner of the property. Between the family pool and the hotel will be a line of open-air cabanas designed “to serve not only as a part to escape from the hot sun and provide shade to families enjoying this family pool but, also, they serve as a design element that disguises the presence of a parking garage underneath that first level of hotel accommodations,” Neville said.

Just north of the main pool, the Watkins lawn area will be preserved between a new ballroom and a renovated HB’s restaurant near the beach. Running along the north of the hotel property will be what is being called the Coconut Connector, a pedestrian walkway that will traverse Gulf Shore Boulevard. On the north side of this paseo will be a series of connected public spaces that will include another new food-and-beverage venue and two retail spaces.

“All of these vary in detail and create a composition that is deliberately different design choices and we’ve taken cues by looking to traditions like Worth Avenue [an upscale shopping and dining destination in Palm Beach] and other great places for architecture and select planting have been incorporated to inspire this composition that we’ve created,” Neville said. “This is one of the few locations where the outdoor experience is defined pretty closely on both sides by architecture.”

The walkway will have connections to an updated Sunset Beach Bar and the hotel’s new beachfront ballroom. Since last June’s presentation, the architects have refined the details of the ballroom entrance. “Basically, the design intent here is a theatrical approach,” she said. “It’s whimsical in continuing this collection of varied details along the Coconut Connector, but the intent is that it looks like the parting of a curtain, deliberately different as part of the pedestrian experience.”

The idea is to break up the architecture of the ballroom’s exterior entrance with contrasting details and elevations as will be similarly done with the different elements of the Veranda restaurant, the porch on the arrival side of the hotel and the family poolside cabanas. “So, it’s a playful, resort-friendly abstracted expression of a theater and the idea of being on stage with curtains parting, of seeing and being seen,” Neville said.

Francis Fee, a neighboring resident in Old Naples, said he wants the hotel’s redevelopment to be a harmonious fit in the neighborhood. “Someone made the comment that this building has to fit in with the surrounding neighborhood for a long time. So, it has to be architecturally correct and architecturally in harmony with that neighborhood,” Fee said at the meeting. “That neighborhood has also been here for a very long time. We’ve been in our house for 31 years and hope to be there for a whole lot longer. So, we have an interest of that fitting in with the neighborhood and ask that that be a principal criteria that you use in approving the request.”

The goal is to find that delicate balance, DRB Chairman Stephen Hruby said. “I’ve always said that change is inevitable and what we need to be able to do is manage change, but manage change in such a way that doesn’t destroy the character of what we have here now,” Hruby said. “So, it is a delicate balance between maintaining character and accommodating change in market conditions and trends. That’s something we feel strongly about, balancing the management of change to maintaining the quality of our city.”

Sat Apr 9 , 2022
Jeffrey Totaro The inclusive restrooms in the I. King Jordan Student Academic Center at Gallaudet University in Washington, D.C., by MixDesign For all their good intentions, “accessible design” solutions can sometimes make things worse. Wheelchair ramps and lanes reserved for people with mobility issues, for instance, can unintentionally create stigma. […] 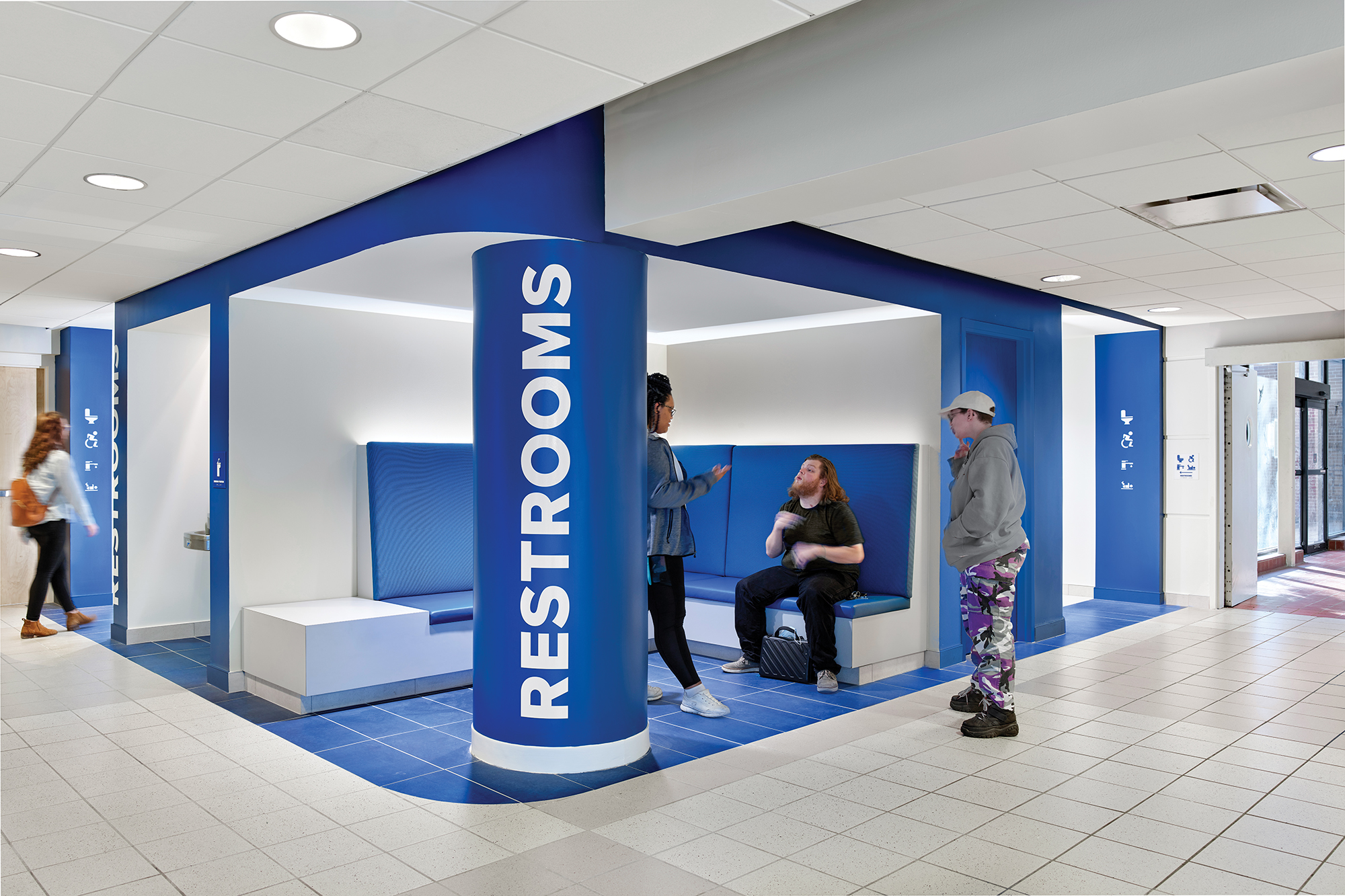