Real estate prices continue to soar in Central Ohio, resulting in more renovations and home upgrades. Here, three Central Ohio families gain new perspective on what their kitchens mean in terms of their daily lives. From the rustic to the innovative, kitchen styles are evolving.

Andy and Lindsey Carr relocated to New Albany from Connecticut three years ago. The home they sold before moving to Central Ohio had been extensively renovated by its previous owners. The kitchen was a favorite room and great for entertaining, so they knew they wanted to recreate a similar space in their local home, which was built in 1996.

The couple started meeting with builders. Hale Construction Company, a design-build firm, was recommended by their real estate agent. “They put together every number to the penny before we signed anything,” says Lindsey, adding that the cost transparency from the start was helpful before starting such a large project.

The home’s previous kitchen had a smaller island in the middle of the room and a half-wall that separated the family room from the kitchen, creating an area for countertop seating. There was also a large doorway that led to the dining area. A second doorway led to a mudroom and the garage. The Carrs’ goal was to open the space and eliminate the walls that sectioned-off the main living space.

Laura Lemon, an estimator and operations manager for Hale, says the most challenging aspect of the renovation was ensuring there was proper ceiling support when removing the wall that connected the kitchen to the former dining space. Lemon explains that a small beam was concealed within the ceiling for additional support.

Lindsey says Serena + Lily influenced her design decisions throughout the process. She also turned to social media, scrolling and saving posts on Pinterest and Instagram to share with Alyson Kaufman, an interior designer for Hale.

“It is definitely easier when people have a sense of style and what they like,” adds Lemon.

“I don’t often stray from my comfort zone, but Alyson pushed me,” says Lindsey. For example, the darker island color, which also matches the nearby bar area, was a color the homeowner says she may not have picked on her own but now loves, as it creates a statement piece for the kitchen.

She also wanted to take a risk with the room’s lighting, selecting a gilded look for the fixtures above the island. “I struggled because I thought all of the metals had to match,” but after consulting with Kaufman, there is a mix of gilded, oil-rubbed bronze and champagne bronze throughout the kitchen.

The Carrs agree it was a top priority when envisioning their new kitchen to have a bar nearby for easy entertaining. They added shiplap and floating shelves behind the bar to pay homage to the previous kitchen’s design.

The panel cabinets were built in Ohio’s Amish country, and the hood design was changed to match. The barn door, which separates the kitchen from the mud and laundry rooms, also complements the kitchen’s new style.

The pantry was relocated from the mudroom and is now placed closer to the refrigerator for convenience. Carr says she originally wanted all stainless steel appliances, but she and her husband now love their new refrigerator, which blends with the rest of the cabinets. A visible built-in wine cooler separates the refrigerator and freezer.

The adjacent mudroom, a laundry area and a powder room were caught in the recent update, too, accenting looks similar to those used in the kitchen.

Now that construction has ended, the Carrs say they have achieved their goals and are enjoying their new space. “I walk in the room in the morning and it’s bright, clean and spacious, and it just makes me smile,” says Lindsey.

Eric and Jenny Small traded city living in Chicago for 5 acres in Ostrander in 2018. They knew when they purchased their historic brick farmhouse that it would need to be renovated to suit their family’s needs, especially since it was previously used as a commercial space.

The half-equipped kitchen was their first priority. Eric is a kitchen designer by trade, so this was a passion project from the start. The home’s previous kitchen had no dishwasher or cooktop, and it had a wall through the center of the room. It was by no means a functional kitchen space for the couple and their six children.

Thus, their first step in the renovation was to remove the wall in favor of opening the space. The Smalls now love the juxtaposition of their traditional farmhouse with its big modern kitchen. “It is important for people to know you can do a modern kitchen in a house like this,” says Eric.

The island is filled with drawers, offering plenty of cabinet space, and the cabinetry system against the wall focuses on efficient storage, too. The modern, synthetic countertops feature nanotechnology with many benefits, including fingerprint and scratch resistance. A selection like this one seemed perfect for a family with children. “Function was really important to us,” says Jenny.

The cooktop’s induction technology uses magnets to create heat. (There are special types of pots and pans that have to be used with this type of appliance.) Eric explains that the pots do not get hot to the surface and only the contents of the pan are heated. Induction is as fast as gas but creates less of an environmental footprint, he explains. The couple says this system also creates a sense of safety with small children, especially since their kids enjoy doing homework at the island nearby.

There are two ovens within the cabinets’ wall system—one is standard and the other is a steam oven. The steam oven is used for cooking vegetables and seafood, says Eric. It is also smaller and uses less energy. While their standard oven is smaller than the typical 30 inches, the couple proclaim that it’s still large enough to cook a turkey on Thanksgiving. (They say this is a commonly asked question, as is a concern expressed by some people regarding resale value of the home.)

The refrigerator is located in a small nook around the corner. The family also uses an antique locker system to store individual snacks for the children.

The Smalls took a leap of faith during the pandemic and started Nollie Design Studio, a full-service kitchen design company. Eric says his first goal when meeting with new clients is to understand how they intend to use their kitchen space.

“I want it to function well first, and then we can figure out the aesthetic,” he says. He often sketches designs in front of clients before completing a full rendering so the process can be as collaborative as possible. After spending the last two decades designing kitchens for other companies, he is now thrilled to be working in his own design studio.

“He is happy with creativity.” says his wife of more than 20 years. “Watching him grow into the designer he is now is really cool.”

Alex and Julie Olemacher purchased their Clintonville ranch in March 2019, bringing along their Bernese mountain dog, Maple. Julie, an intuitive eating and body image coach, loves to cook. She knew at some point she would want to give the home’s galley kitchen a facelift.

Because this is their first home, though, the Olemachers did not want to do a full kitchen renovation just yet. They thought they’d start small.

“The sink was actually the entire inspiration for the kitchen project,” says Julie. The previous sink was too small to even soak a pan. It was replaced with a black matte sink from Build with Ferguson. “When I found the sink, everything fell into place, and I leaned into the black and white aesthetic,” she says.

Olemacher says she learned to love Scandinavian design after visiting family in Denmark. She initially thought the dark sink was risky, but she found a matte black faucet to complement this statement piece.

The couple hired Columbus Handyman to help them complete the minor installations during the update, which included the sink, a full tile wall, updated cabinetry hardware, a new dishwasher, shelving and a butcher block countertop to replace the old one.

The Olemachers worked with Frankie Cropper, an interior design consultant. “I thought I would love an all-tile wall,” says Julie. “Frankie agreed and gave me the courage to do it, which reaffirmed my own intuition.” The light fixtures, purchased from Joss + Main, were also added to the refreshed space.

Today, Julie says there is a misconception that to have a dream kitchen “you have to have a big house, too.” Through this project, the couple has learned otherwise.

“You can make a small kitchen really fabulous and make it your style,” says Julie. “I love our kitchen.”

Mon Oct 18 , 2021
Diwali decor tips: Diwali is the time of the year when we indulge ourselves in enjoying various types of delicacies from sweet to savoury! We all know what snacks and sweets are specially made for the festival of Diwali, but a decorative dining table can undoubtedly make your feast more […] 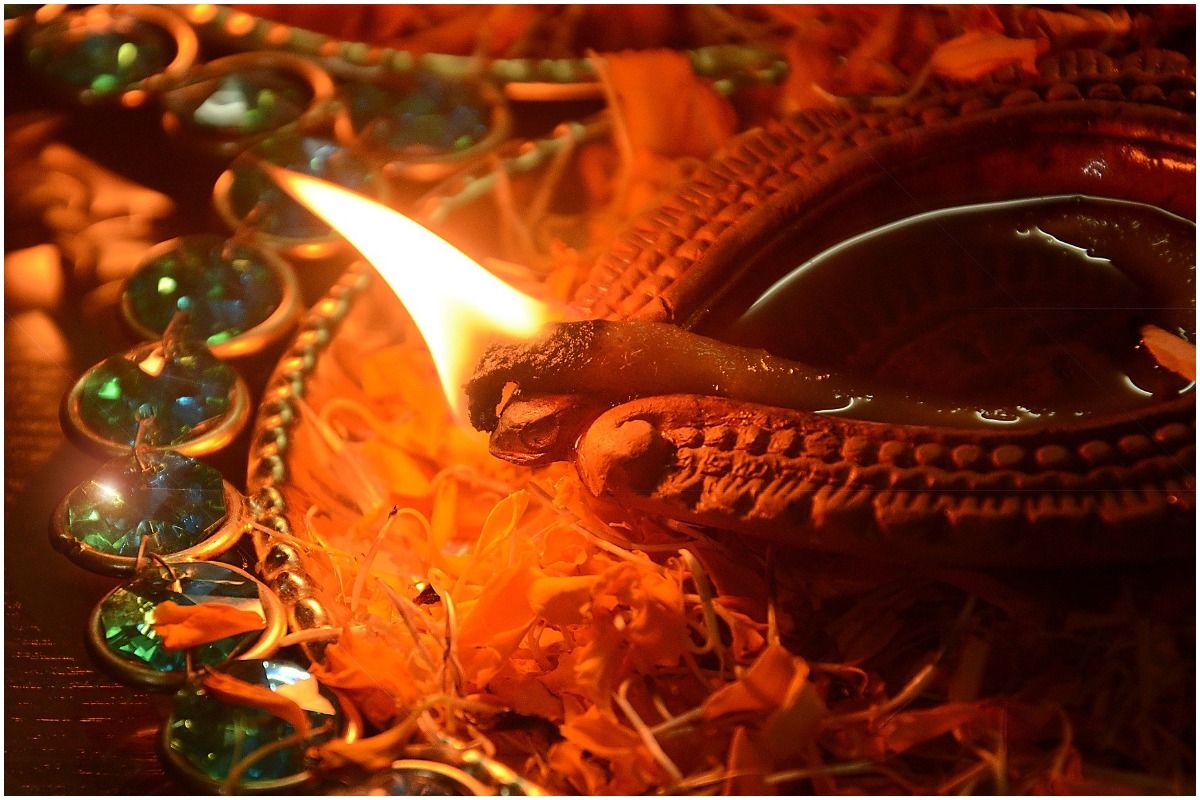